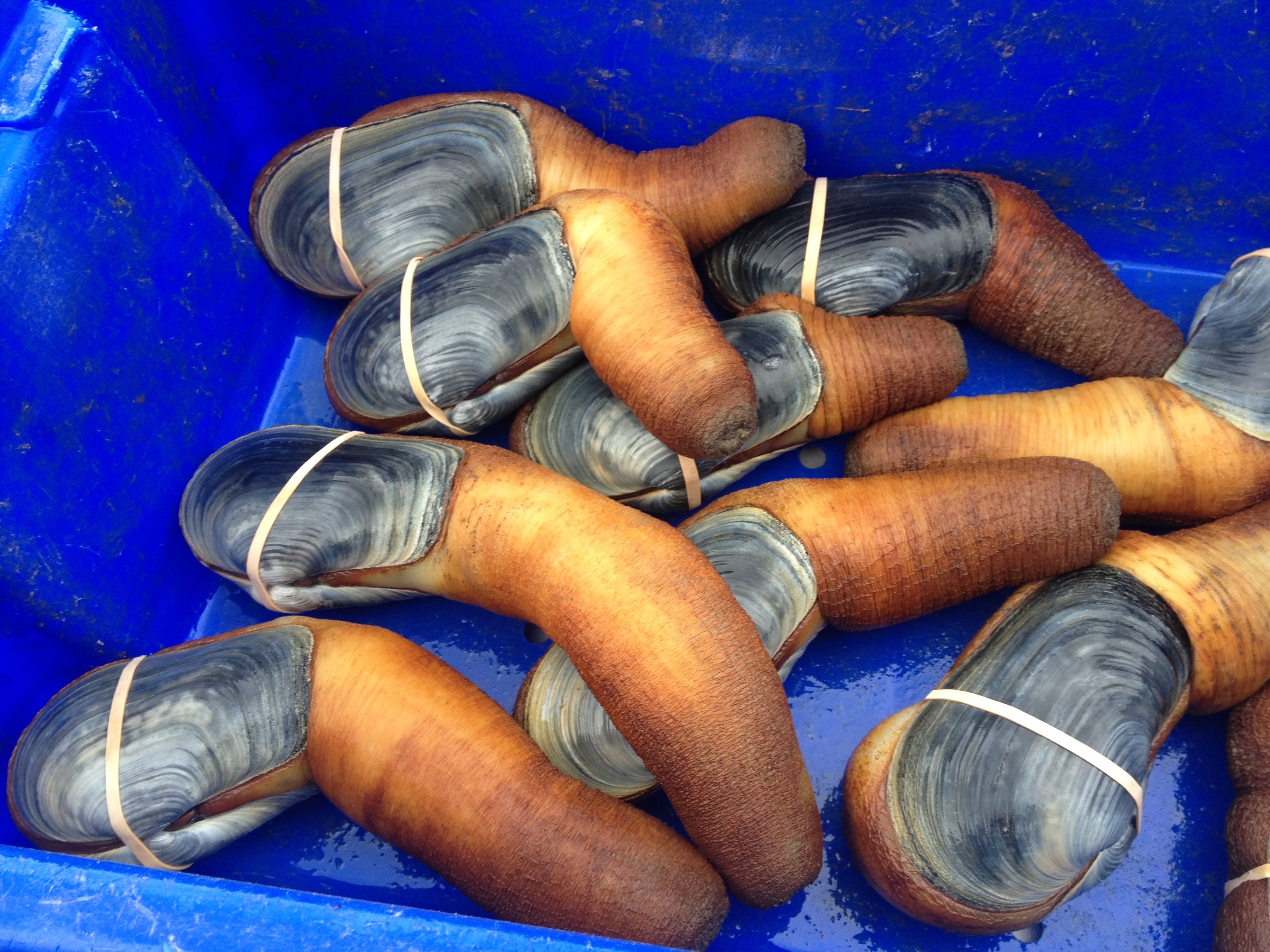 Getting their ducks in a row

Cunliffe, who is also a deep-water commercial fisherman, set-up the company in 2008 with a business partner, when they started acquiring ACE for the deep-burrowing clam – their biggest allotment being 11 tonnes in FMA7 (Nelson/Marlborough).

Geoduck is a dive fishery, with the diver weighted to the bottom, individually picking the fish and breathing through a hose with surface supplied air.

After moving small amounts into China and to the restaurant Live Fish in Auckland, they acquired a three-year special permit from the Ministry for Primary Industries.

However, without the experience in marketing, they have struggled to move that quota into overseas markets. “We have sold into China but never consistently and it’s quite a big operational thing,” Cunliffe said.

PZL suffered a major setback in year one of the special permit when a supply contract into China fell apart at the last minute, after a Korean geoduck came on the market undercutting the price.

“Ours is a better fish and we have to get that across to the market.

“We just need someone to take hold of the duck from the boat and sort sales and logistics into the markets. That’s where a strong business partner would come in so we can concentrate on harvesting.”

The meaty siphon is sought for its flavour and texture. The geoduck is considered a delicacy in China and also features in Korean and Japanese cuisine, served variously fondue-style, in soups and stews, and raw as sashimi.

Auckland University of Technology Professor Lindsey White has worked with Cunliffe in establishing the sustainability credentials of the fishery and said there is big potential for growth.

“Looks like the total allowable commercial catch, just from surveying that very small area, not extrapolating for the whole of the FMA, is in the order of around 40 tonnes or so,” White said.

“Given that the total allowable commercial catch around that FMA right now sits at about 17 tonnes, we think there could be significant increases in what can be sustainably harvested.”

The special permit further illustrated that there was confidence in growth for the area, he said.

“I guess the point to be made there is that MPI were comfortable there was enough clams that taking 100 tonnes in year three was not going to damage the fishery in any particular way, and 100 tonnes a year would be a pretty good fishery.”

PZL have also been working with Cawthron Institute, providing them with brood stock so they can better understand the early stages of the geoduck’s life cycle.

Aquaculture group manager Serean Adams has been working with the clam for 10 years now and said Cawthron wanted to help develop geoduck aquaculture in New Zealand, primarily because of their high value in the Asian markets.

“Our work is focused on improving the techniques and methods used for the production of juveniles in the hatchery, as well as developing commercially feasible methods for growing geoduck in coastal areas,” Adams said.

She agrees with White that further research could present new opportunities.

“I think there is great potential for this species both as a fishery and for aquaculture.”

To store and clean the geoduck, PZL have been using the Cloudy Bay Clams depuration facility, just south of Seddon.

This can hold tens of thousands of molluscs and is the only one of its kind in the country.

Specially designed tanks are used to pump fresh seawater from the ocean, allowing the clam to purge itself of any sand or grit.

Cunliffe said PZL was grateful for Cloudy Bay letting them use their facility, but would like to build one of their own to help grow their business substantially.

“We need something like that to actually go forward. It’s not that expensive but it’s got to be done.

“There are a number of sites you could do it in; there’s some in Golden Bay and places in Nelson … so it can be close to the source of the fishery or close to export market sites; like a local airport or near the international airports.

“The geoduck is really hardy and travels well so the tank can be situated almost anywhere.”

With the fishery at times subject to closure under the Marlborough Shellfish Quality Programme, having the facility would allow PZL to hold and export fish, even when the growing area is closed.

“It’s continuity of market. You can harvest and then hold and then send when the market needs it.

“There’s a whole lot of good reasons for it.

“We need that facility and we need some marketing muscle – someone who can go into China and get this fish established.”

The New Zealand market will be playing catch up with Canada and USA, where exporters along the west coast, particularly in Washington and British Columbia, have already identified the value of geoduck.

The boost in exports has been a response to continued demand in up-market Chinese and Hong Kong restaurants, where the delicacy is fetching up to $400 a plate.

PZL Harvester continue to sell their geoduck through Live Fish and at Solander’s online store, Gourmet Seafood, but the export potential is being missed.

“We have the New Zealand ‘clean green’ image behind it, but we have to get it over there.”

Fishing and the environment - it shouldn't be an either/or

This week’s release of the National Plan of Action on seabirds was the result of three years of discussions between industry, eNGOs, Fisheries New Zealand and the Department of Conservation (DOC).

Warming waters an increasing threat to the planet and fishing

The volume of chatter about the global environment has been temporarily turned down while the world deals with a more urgent and imminent virologic threat and so it is little wonder that a recent study on the health of the world’s oceans has sunk...

Forging into a new food frontier

A report from KPMG recently provided a stark wake up call for food producers who believed that eventually, in some distant pandemic-free time, it would be business as usual for providing and serving customers food.