It’s a busy job and Scott takes every opportunity to leave the office and talk to inshore fishers. She has a particular interest in fishers who bottom trawl for family-favourites such as terakihi, gurnard and flounder in the Tasman and Golden Bay region, talking to them about their beloved boats, gear and how they keep their trawling footprint light.

It is important to her that people have the chance to learn about things like trawling, so Scott writes an occasional column for fishing magazines and has some information to share with Stuff readers for World Oceans Day.

“Whereas we can see farming tractors, cultivators and harvesters in paddocks and on roads, the food produced by fishing is a bit more of a mystery perhaps. You can only see what bottom trawling looks like, to any degree of accuracy, while it’s happening underwater.

“Most Kiwis have heard of bottom trawling but probably have the wrong idea about it. I talk to fishers about their gear and use photos so people can see the size of things like chains, also the boat itself. They are usually surprised to see that the gear is smaller and lighter than they thought it would be.”

Scott lives in the Nelson Tasman region where the seafloor terrain is soft mud, sand or gravel. She explains the relationship of terrain to fishing method.

“The gear used on a trawl is designed for the area being fished, the behaviour and size of the target species and the size of the vessel.  The gear is also designed and chosen for the type of terrain being fished. A mud, sand or gravel terrain means these fishers only need light contact with the seafloor to catch their quota.

“Just like land-based food production, bottom trawling fishing has its effects. It is undisputed that trawling touches and disturbs the seabed in the fishing ground, the same limited spots typically returned to annually or seasonally. This is called the trawl footprint.

“Fishers aims for the lightest footprint possible. They do not want to fish in areas with a rough, hard seafloor (e.g. where there are lots of rocks or coral) as this can cause extensive, expensive damage to gear. Trawling on rough ground can also affect the habitats that support the life cycle of the species in the fishery – something that fishers are very aware of.

“If you look at fishing nets, you’ll see the mesh size is graduated, to allow smaller fish to escape at the front end of the net while the large fish swim towards the cod-end. And while the minimum mesh size is regulated many fishers choose to use a larger mesh size or configuration to allow juvenile fish to escape and to achieve a more precise and sustainable catch.”

Scott enjoys her ‘tech net’ conversations with fishers – it’s something they put a lot of enthusiasm and effort into.

“Sometimes fishers build ‘escape panels’ into nets to allows larger sized fish that they do not want to catch out of the net. The design and placement of these panels is determined by the studied behaviours of particular fish species, a fascinating aspect ‘net tech’.

“A more precise catch, with less sorting on deck needed, means shorter trips and less fuel. This is something I’m sure most readers can appreciate with the price of fuel right now, but it’s also another way fishers can lighten their footprint.” 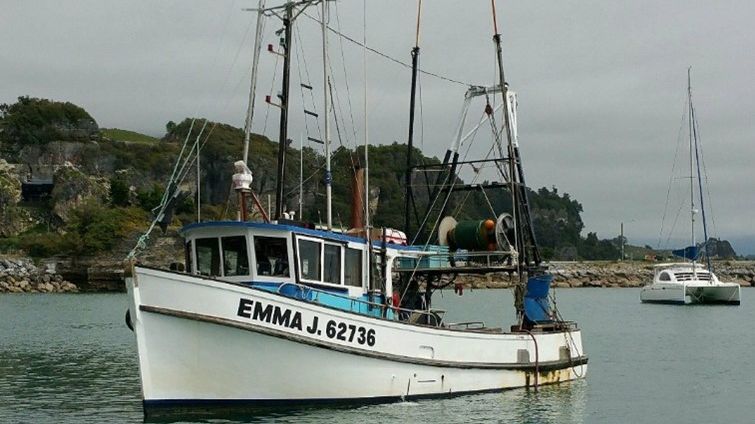 Inshore trawl vessel the Emma J is a typically-sized inshore coastal trawler that you can see in coastal ports. Carol encourages Kiwis to take a look at the fishing vessels in your closest port and if you get the chance, have a chat to a fisher about how they catch their quota. (Credit: Peter Loman)