With the Fisheries Amendment Bill underway, the Bluff fisher is concerned that the prospect of increasing monitoring and regulation and the threat of heavy penalties will be too much for some.

It’s a well-qualified point of view. As well as drawing on the experiences of his own crew and family, Nyhon hears from fishers across the motu. He is the southern liaison officer for the New Zealand Federation of Commercial Fishermen, and a FirstMate navigator. The latter, in particular, is a job that puts his finger on the pulse.

FirstMate is a charitable trust that supports commercial fishers and navigators to help fishers and their whānau overcome challenges, connecting them to experts when it’s needed – whether it’s for physical and mental health, business and finance or technical advice.

Nyhon says it’s an essential service, and increasingly so, because while fishers typically love their jobs it can feel like the odds are stacked against them.

“But despite this, fishers aren’t always believed and the pressure of trying to please everyone can just snowball.”

In Nyhon’s experience, a punitive approach does not bring out the best in people.

“The introduction of new fines, up to $100,000 in some cases, is enough to scare people out of business but it’s also reinforcing the public misconception that fishers are reckless rule breakers. That’s just not the case.

“I’ve seen a lot of fishers come and go – it’s survival of the fittest these days.”

Looking at Nyhon’s own career, there’s no doubt that he is one of the ‘survivors’, but it’s clear his success is as much due to smart business moves as to sheer endurance through regulatory change.

Nyhon went out of his comfort zone to purchase Cressy.

“People didn’t pay that sort of money for trawlers in Bluff in those days.”

The investment in the state-of-the-art boat paid off. He’s been able to fish both deepsea and inshore, and to keep building his quota. After all, as Nyhon says, “a boat is only a toy unless you’ve got a quota to catch”.

He’s also stuck with the advice he was given as a 16 year-old on his first fishing trip with an uncle over the school summer holidays.

“I was taught that presentation is everything. Fish should look good, be clean and nicely iced, because you never know who is going to be standing on the wharf looking down while you’re unloading your catch.”

That first trip made quite an impression on the young Nyhon. He’d grown up on farms and had started his farming career, giving it a few years until a job came up on a crayfish vessel in 1987 when he was 19. He stuck with that for four years, fishing Milford Sound and down to Bluff.

Once Nyhon gained his skipper’s licence from Otago Maritime School he settled into the hard graft, honing his inshore fishing skills and crew management while skippering for others. One vessel in particular, Huatai, kept him on his toes. Nyhon describes her as “a bit of a mechanical nightmare” but he learned a lot before moving on after three years to skipper his ‘dream boat’ Echo for the next 11 years.

Finally, about 14 years running other people’s boats, Pat decided it was time to buy his own –Antares.

“It was a big leap at the time, I ran her for five years before taking an even bigger leap with the Cressy in 2011, which I still run today.”

Nyhon has continued to invest in Cressy, upgrading with new electronics, better nets and better gear. It’s all towards a sustainable catch – catch sensors and net monitors mean you can see what’s going into the nets and know when the cod end is starting to fill, so the net can be brought up before it’s overfull and fish are at risk of damage.

Nyhon enjoys using the catch monitoring software Deckhand and welcomes marine observers onboard to collect more detailed data. Cressy has enough bunks to accommodate an observer, so he doesn’t have to leave a crew member behind like owners of smaller vessels have to do.

When it comes to the prospect of onboard cameras however, Nyhon doubts that they will add much value to what it is already reported and observed.

“They’re not going to get the level of details they think they will from the footage.”

And what would a camera capture on Cressy? Nothing particularly useful, says Nyhon.

“You’d see the nets landing at the back of the boat, what comes out of the cod end, and the trawl warps (ropes).”

It’s highly unlikely you’d see any seabird bycatch, and dolphin bycatch is not an issue where Pat fishes.

“We see dolphins playing out the back but they steer clear of the nets. I think people forget how intelligent they are. They can figure it out.”

What is certain however is that the cameras will capture crew going about their professional and personal business – a loss of privacy that Nyhon says is yet one more weight on loaded shoulders.

Nyhon would like to see fishers given more credit for the proactivity. He’s seen a big shift in attitudes over the years, with fishers’ more likely now to hold each other to account for sustainable fishing practices.

“If you see someone who should be using seabird catch mitigation, like a tori line, you’ll speak up about that.”

So what can a skipper or owner-operator do to help alleviate the pressure on crew and other people they care about?

There’s FirstMate of course, and online health, safety and wellbeing courses like MarineSAFE.  Pat puts new crew through the courses and did them himself to pick up a few new tips.

He has a ‘dry boat’ policy, meaning that the crew wait until the end of their trip to wind down together with a beer, and says that this is fundamental to keeping things running smoothly and safely on a trip.

But best of all – the ocean and the fresh air is the ultimate remedy for a bad day and the blues. “It’s the big, blue health camp,” says Nyhon. 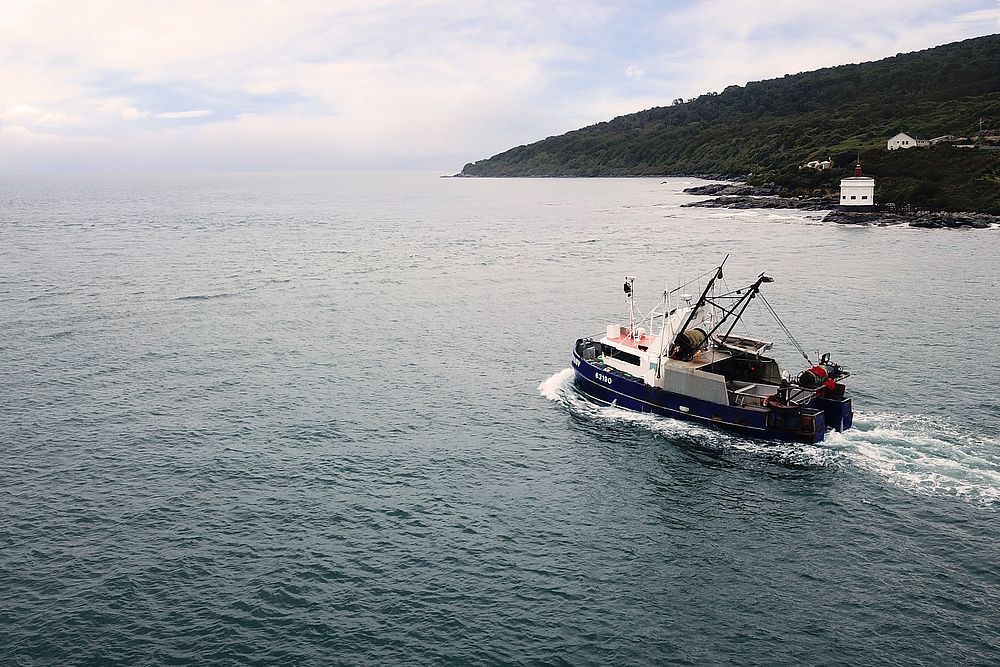