It’s the day before the start of the long Easter weekend and Ant Smith is working in his boatshed in Carey’s Bay, Port Chalmers.

His 60ft steel trawler, Donna Maria, is having the day off, but Smith isn’t. There’s always work to do when you’re the owner operator of a boat in her 40s. But the tui are singing and it’s a balmy late summer’s day. Life’s good – some of Smith’s crew are helping out in the shed and eldest son Ben is on his way to lend a hand, with Smith’s grandkids in tow.

Carey’s Bay is a picturesque fishing village where Smith grew up in the second-closest house to the wharf. Fishing was all around him but he didn’t start fishing until he was 24 and had already given plumbing and construction work a good go.

“I filled in on the boat for six months under the wing of one the best skippers in the region and didn’t look back. That was 33 years ago,” Smith says.

The boat was Aurora, which Smith later purchased, marking his career move from skipper to owner operator. He now has a team of three, all Dunedin locals, and skipper Rick is shaping up nicely Donna Maria, leading three-to-four-day voyages bottom trawling for ling, gurnard, and flat fish.

“It’s satisfying work and is still a career with good prospects, especially if you put the effort into training and learning new technology,” Smith says.

Smith is no stranger to upskilling, especially when it comes to sustainable fishing. In October 2019 he was selected by Talley’s as one of 10 skippers to undertake a sustainable fishing course in the Canadian province of Newfoundland. He had been on the sustainability journey for a while, mainly focussing on better net and cod-end configuration but describes the Newfoundland experience and last 10 years as a game changer.

“What we get in the nets now is just so much better. Bycatch is minimal, the fish are better quality in the net and it’s much easier on the gear. But most importantly it means that fishing has a future – my descendants can fish the same abundant grounds that we’ve already been fishing for 100 years.

“We’ve invested in sensors and monitors so that we can adjust the trawl net for each tow. We often fly just above the seafloor and the net doors typically run quite lightly along the bottom. Talley’s bought even better 5-inch cod-ends for its owner-operators and made sure we use them too.”

Smith also appreciates the advances of electronic reporting, in particular the real-time reporting of catches, discarded fish and unwanted catches – down to the half-kilo. Training is key though and Ant admits he’s struggled at times with the data entry, leaning on the support of Talley’s to work through issues.

To people entering the industry Smith says “Get some training, industry-led training is best, and find out what tools you can use to check data and make sure your reporting is as accurate as possible.”

When looking ahead to the roll-out of cameras on inshore fishing vessels, however, Smith is less confident in the application of this kind of technology.

“I’m happy to come under scrutiny. We welcome fishery observers on our trips, even when it means one of our crew has to stay home and miss work, so the observer has a bed. They gather high-quality, useful information and it’s got to be beneficial to the science.

“But cameras aren’t going to achieve much, on my boat at least. It’s intrusive monitoring and there won’t be much to see in the footage. It might be a way of confirming that what we are reporting about our catch and discards is true, and I’m happy with that. But the cost is going to come back on fishers, when most can’t afford it, and when we’ve not been told enough about how this is all going to work.”

Smith would like to see the policy-makers and government leaders try to understand the real fishing environment.

“It’s the disconnect that bothers me most. If you look at the proposals around landing and discards and didn’t know any better, you’d think it was an easy thing to bring everything we catch back to shore.

“I’d rather not be bringing spiky dogfish and undersized fish back home for landfill when we can return them to sea.”

So what about other types of bycatch? Will cameras help towards greater protection for protected species?

“I’ve caught two or three fur seals over 30-plus years and that’s not a nice experience at all. I’ve never caught a dolphin and don’t know any inshore fishers who have.”

He has caught a mine however – netting a stray air force training bomb. Thinking it would be an interesting ornamental garden feature, he brought it back to shore and called the police. The response was more than he’d anticipated however – the port was closed for half a day while a bomb squad from Christchurch inspected Ant’s peculiar ‘bycatch’ and took it away to be defused.

It’s a good story, especially for a president of the 112-year-old Port Chalmers Fishermen’s Co-operative Society. For when he’s not out fishing, mentoring young skippers or maintaining the Donna Marie, Ant is active in his community. As president of the historic co-op, he oversees the bulk procurement of fuel and other supplies and liaises with Port Otago on port facilities and infrastructure.

The co-op also has an important safety function. “Every fisher here is a co-op member. We’re not all best friends but we all work in the same environment and we rely on each other for safety. We can also make a difference by donating fish to local foodbanks, with the support of Harbour Fish and Talley’s.” 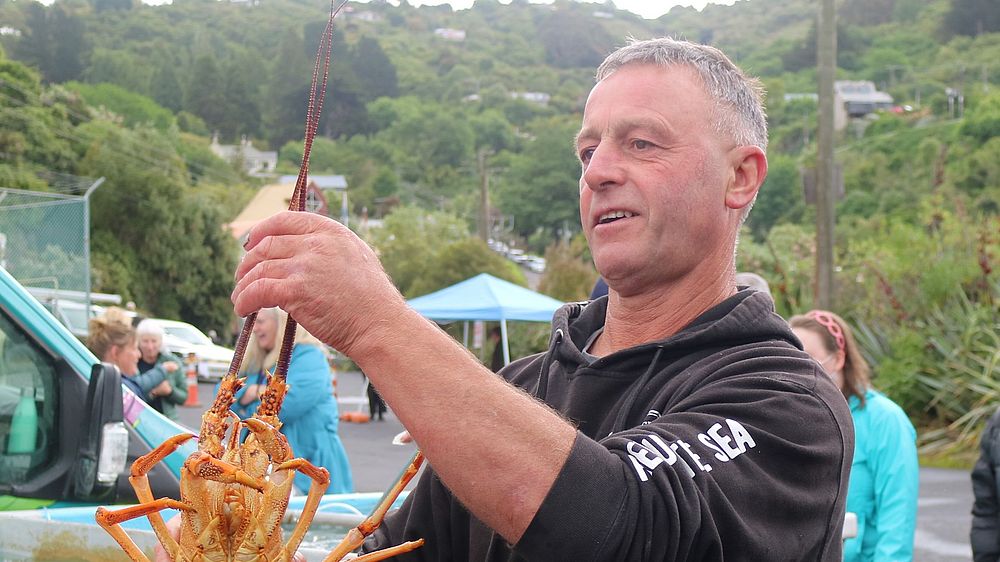 Ant Smith entertaining young crowds at the hugely successful 'Meet the Fishers' day in Carey’s Bay, which he organised, in November 2021.